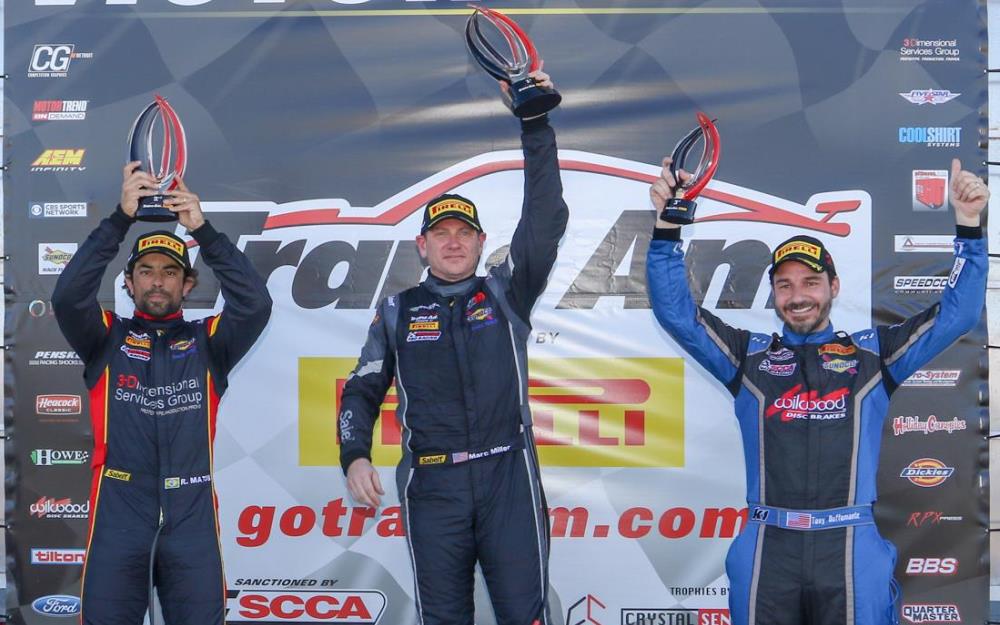 SEBRING, Fla. [March 4, 2018] - Ernie Francis, Jr., and Marc Miller captured the first Trans Am victories of 2018 today at Sebring International Raceway as the Trans Am Series presented by Pirelli held two 100.98 mile, 27 lap races for its opening round. Also capturing class wins were Mark Boden and Andrew Aquilante, in TA3 and TA4, respectively.

The Trans Am Sebring 100 featuring TA, TA3 and TA4 classes

Defending TA class champ Ernie Francis, Jr., started the 2018 season in the same fashion he brought 2017 to a close, on top. Francis began the 100.98-mile competition in second position, chasing pole sitter Paul Fix, in the No. 4 StopFlex.com/CarCoachReports.comFord Mustang, but the pursuit was not a lengthy one. The No. 4 was slowed and eventually sidelined by mechanical issues, ending Fix's day on lap five.

From then on Francis would lead the 17-car TA class field, building up a comfortable gap on Lawrence Loshak, then running second in the No. 2 Pennzoil/ETE/GoShare Chevrolet Camaro, and Chris Dyson, in the No. 20 CD Racing Ford Mustang, running third.

Dyson would overtake Loshak on lap 14 and settle into pursuit of Francis in the No. 98. A full-course caution came out on lap 21 to retrieve the No. 81 Chevrolet Camaro of Kenny Bupp stopped in turn 13, bringing the field back together and providing Dyson the opportunity to challenge Francis for the lead, albeit with lapped traffic between them, on the restart with only three laps remaining.

Francis was able to keep Dyson at bay, bringing the No. 98 past the checkered flag to secure his 11th career TA class victory on a weekend where the Breathless Pro Racing team and crew worked tirelessly to help bring home the win-an effort that included a complete aero swap, clutch change and engine change.

"This was a really tough weekend for us," said Francis. "Coming out here as the champions from last year, we knew we had a target on our back. Mechanical issues just kept popping up on the car; we were up until midnight the first night, midnight the second night, three in the morning last night- all working on this car. But the crew got it done. The 98 Original Frameless Shower Door/ R&B Company Ford Mustang was fast. We had the pace, and it was consistent from beginning to end."

"I knew Chris (Dyson) was going to be quick," said Francis. "He's in a Meissen chassis too and we knew he had a good setup and he's a good driver-the traffic between us wasn't going to slow him down. We didn't want to see that restart, but it made for an exciting finish and the No. 98 was there for the push we needed at the end."

Dyson would secure second position by a comfortable margin of his own, bringing home a podium finish in the debut of the No. 20 and his CD Racing team, announced only Wednesday of this week.

"We started planning on this in the fall," said Dyson. "We definitely got down to the wire with suppliers and the guys worked their tails off to get me here and I'm thrilled to be up here on the podium. We're new to the Series, but I think we're going to learn quickly. We'll try to give Ernie some trouble and run up front and just keep getting good points on the board every weekend and try to put together a good championship run."

Dyson made his Trans Am debut in 2017 at Watkins Glen, a guest driver for Kryderacing and David Pintaric, a sample of TA racing that was enough to mount a championship effort for 2018.

"I got a chance to drive the cars last year," said Dyson. "I was really impressed with the rawness of the car. They're brutal-brutal engine power, good handling, but no driver aids. I really enjoyed the element of feeling like a driver-you can really make a difference and bring a lot to the table. You've got to look after the tires, you have to manage the fuel load- it feels fresh and exciting. It fits in with a schedule of diverse racing this year, plays into our skillset and we've got a great group of partners. I think we're going to build on this."

Finishing third was no other than David Pintaric, in the No. 57 Kryderacing Cadillac CTS-V, surging from fifth position off the restart for his ninth career podium finish. Simon Gregg, in the No. 59 Derhaag Motorsports Chevrolet Corvette, and Lawrence Loshak would complete the TA class top five.

"Tim and I typically drive and gain our lap time in very similar ways, and this weekend we really didn't," said Boden. "We were running similar lap times in very different ways this race; I think he just wore down a little bit more than I did. We had a lot of fun out there; we were waiting for Randy (Kinsland) to come in and join the show before he had mechanical issues. The Fall-Line Porsche was awesome, thanks to Pirelli and Sunoco- all the people who make this possible."

Another member of the Fall-Line trio, Tom Herb, in the No. 16 Fall-Line Motorsports Porsche 991 GT3, would secure second place on the TA3 podium, tying a career best finish for the 2017 Rookie of the Year. Kezman would recover from the flat tire, overtaking Dave Ricci, in the No. 71 Breathless Racing Chevrolet Camaro, for third position on the podium by way of the restart.

Ricci would finish the race in fourth position in TA3, while debutant Alline Cipriani, in the No. 60 Ginetta Cars Ginetta G55 completed the top five.

In TA4 Andrew Aquilante, in the No. 32 Phoenix Performance/ Hawk Chevrolet Camaro SS, was victorious as he debuted the Heinricy Heritage Chevrolet Camaro, built specifically by Trans Am's TA4 class by Phoenix Performance. Aquilante was pursued heavily by defending TA4 champ Brian Kleeman, in the No. 07 DWW Motorsports/ Racetech Ford Mustang, before the No. 07 began experiencing fuel issues and was forced into the pits, leaving the No. 32 to coast to the win.

"It's fun to come here with a new car," said Aquilante. "Our Heinricy Heritage Chevrolet Camaro made its debut in TA4, and we're here to look after things. I was being careful not to use too much car at the beginning and kept Brian (Kleeman) a little closer than I would have liked. Honestly, if we hadn't, I don't know how much car we would have had at the end."

"In the scope of pro racing in North America right now, Trans Am is really the only place you can build your own car," said Aquilante. "A lot of other series are going to homologated cars that you can't really tinker with yourself- and that's making things rather expensive. We're going to see how things go and who comes out of the woodwork to compete."

For David Pintaric's charge to third in the TA class on the restart he was awarded the CoolShirt Systems Cool Move of the Race.

In the TA2 class' independent competition, Marc Miller, in the No. 12 Speedlogix/ Prefix Dodge Challenger, emerged victorious after a race long pursuit of pole sitter Rafa Matos in the No. 88 3-Dimensional Services Group Chevrolet Camaro.

Matos would lead the 31-car TA2 field for the first half of the race, building up a three second gap on second position. However, the No. 88 was reeled back in by a set of full-course cautions on laps 16 and 18, both to retrieve cars stopped on course in unsafe positions.

With Matos back within reach, Miller, who had worked his way up from fourth position to second, followed the No. 88 closely, swapping positions once, but unable to make the moves stick. However, opportunity presented itself when the leaders entered traffic on lap 24; and with the No. 88 slowed by a lapped car in turn 15, Miller made the pass.

Matos would be denied an opportunity to return the favor after contact between the No. 63 of Bob Lima and No. 87 of Doug Peterson, Matos' teammate. The No. 87 would contact the tire wall in turn 15 with only two laps remaining; officials determined there was insufficient time for repairs and the race ended under yellow- leaving Miller with a TA2 victory in his official Trans Am debut.

"The race started a little up and down for us," said Miller. "I didn't get a great start. Shane Lewis, not through any fault of his own, got into the back of me- I didn't accelerate fast enough and fell back to fourth. I knew how good the car was under the brakes, and I had a great run out of turn seven- that combination gives you a great chance of making a pass at turn ten, where I made up most of my positions. With Rafa, that last pass was just an opportunity; I saw him really trying hard to keep me behind him and he slid wide and I pointed it by him."

"It goes without saying that this Series is tough," said Miller. "You've got a lot of really quick drivers; and if you are off just a little in setup and you overdrive early, it's going to be tough for you. Joe Stevens was on the radio reminding me we still had 30 minutes to go and just take care of the car; a caution will come out, and you'll have an opportunity. I had a bit of a power steering issue and fuel starvation towards the end; we had to switch to reserves, so those make the emotions high- but nothing beats the emotion when you take the checkered flag and stand up on the podium. A big thanks to Speedlogix, Prefix, Sabelt, Stevens-Miller Racing and Pagid brakes for making it happen."

For his pass for the lead, Mark Miller was awarded the CoolShirt Systems Cool Move of the Race, while Rafa Matos set the fast lap for the TA2 class with a 2:09.364.

In total, 59 competitors featured in Trans Am's opening round at Sebring.

The Trans Am Series presented by Pirelli will return to the track March 29-31 at Road Atlanta for Round 2 of the 2018 Trans Am Championship.