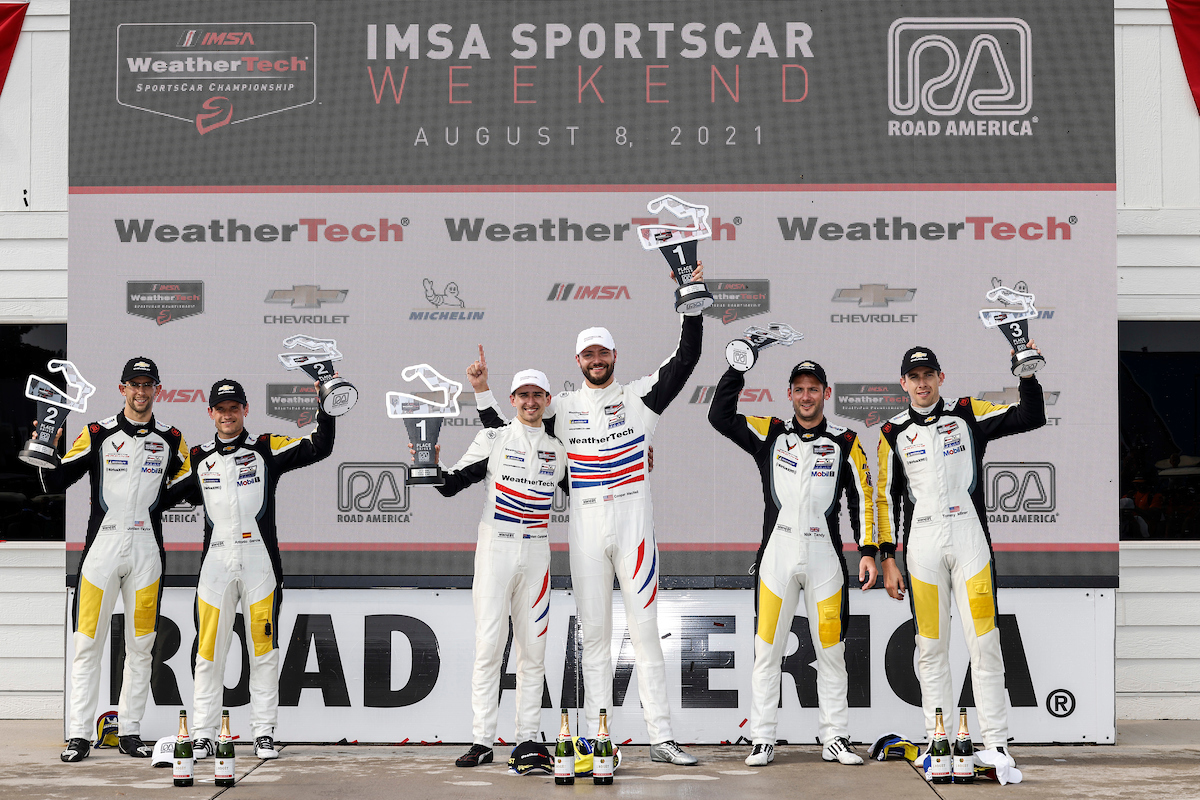 Porsches Own Top Step of GT Podium at Road America

Cooper MacNeil and Matt Campbell capitalized on a two-stop strategy in the No. 79 WeatherTech Racing Porsche 911 RSR-19 to win the GTLM race ahead of the two Corvette Racing entries. Zacharie Robichon and Laurens Vanthoor followed a similar path – two pit stops – and cruised to the GTD win at the 4.048-mile, 14-turn road course in the Kettle Moraine area of central Wisconsin.

It’s the second win this season for both the No. 79 and No. 9. Each was also victorious in March at the Mobil 1 Twelve Hours of Sebring Presented by Advance Auto Parts.

MacNeil started the two-hour, 40-minute race in the No. 79 Porsche, keeping touch with the Corvettes ahead of him until making the first stop under a full-course caution less than an hour into the race. Campbell wheeled the No. 79 from there to the finish with just one more stop, nursing the car to the checkered for the last hour on a single tank of fuel.

“We haven’t had the best of runs since Sebring, and now to get our second win, it’s a fantastic result,” the 26-year-old Australian said. “Especially the way we did it is pretty special by beating the two Corvettes, it’s always harder.”

MacNeil and Campbell, who teamed with Mathieu Jaminet to win at Sebring, benefited Sunday from a drive-through penalty assessed to the No. 4 Corvette Racing Corvette C8.R for wheel spin while the car was on jacks during its final pit stop. It mattered not to MacNeil, the Illinois native who won at his home track and that of sponsor WeatherTech for a second time.

“I couldn’t be more thrilled to get a home win in front of 300-plus (WeatherTech) employees, family, friends and, of course, all the fans who are here this weekend,” MacNeil said. “It’s a huge win for me, obviously this one is very important with it being my home track. It’s definitely up there with Sebring earlier this year.”

MacNeil and Cooper finished 15.855 seconds ahead of the No. 3 Corvette shared by Jordan Taylor and Antonio Garcia, ending a three-race win streak for the No. 3. Hindered by the penalty, Nick Tandy and Tommy Milner finished a lap down in third in the No. 4 Corvette.

Garcia and Taylor lead Milner and Tandy by 214 points in the GTLM standings, with MacNeil just nine points farther back.

Robichon’s Rousing Restart Leads to GTD Win for No. 9 Porsche

Robichon played the pivotal role in the No. 9 Pfaff “Plaid” Porsche winning in GTD. The Canadian dove into the pits for fuel and tires just before the first caution to gain valuable track position. On the ensuing restart, he bolted from sixth place to second and a lap later passed Frankie Montecalvo in the No. 12 Vasser Sullivan Lexus RC F GT3 for the class lead.

“I think the crew made a fantastic call to bring us in right before the yellow,” said Robichon, who won at Road America for the second time in three years with Pfaff. “I think they saw it coming, so that allowed us to actually get two laps under caution where we were able to warm up the tires. The cars in front of us were all on older tires, so I knew we’d have the advantage.

“I knew it was sort of an important time, so there are times you’re going to make a decision and you’re not sure it’s going to work or worth the risk. And that was one of them. It worked out. With the (No.) 12 car … I kind of forced him into a mistake, probably because he had older tires and was struggling to get them up to temperature, so I used that to my advantage.”

Robichon stayed in front until making his final stop with 57 minutes remaining in the race. Vanthoor took over the No. 9 and brought it to the finish 11.876 seconds ahead of Robby Foley and Bill Auberlen in the No. 96 Turner Motorsport BMW M6 GT3.

“Zach did really amazing in his stint. He gave me the race on a golden plateau,” said Vanthoor, a winner at Road America for the first time. “It was a bit of a fuel race as well because, with the yellows, everyone was trying to make it to the end, and there was some tire rubs here as well. I was trying to be smart and manage the fuel numbers and the tires, but it worked out well.”

Auberlen and Foley regained the GTD championship lead with the second-place finish. They are 18 points ahead of No. 23 Heart of Racing Team Aston Martin Vantage GT3 drivers Roman De Angelis and Ross Gunn, who finished fourth Sunday. Robichon and Vanthoor moved into third place, 100 points out of the lead.

“Going into the season, the goal was clear: to fight for the championship,” Vanthoor said. “It slipped away a little bit the last few races. Now we’re back and we need to keep this momentum up.”

Gunn and De Angelis hold a 202-point lead over Auberlen and Foley in the IMSA WeatherTech Sprint Cup for GTD competitors in the non-endurance events.