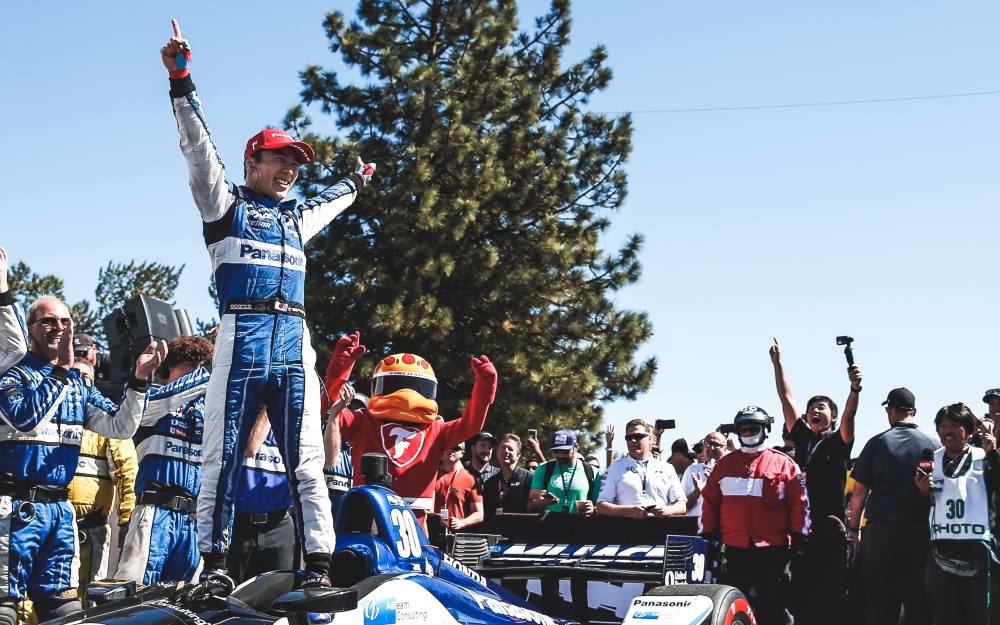 Dixon salvaged what could have been a disastrous points day relative to the Verizon IndyCar Series championship by finishing fifth. Rossi had bad luck of a different kind but managed to scramble back to finish eighth, losing just three points to Dixon, the leader in the season standings.

One double-points race remains: the INDYCAR Grand Prix of Sonoma on Sept. 16. Dixon and Rossi are the primary contenders for the championship, separated by 29 points. Team Penske's Will Power and Josef Newgarden lurk in mathematical contention, with each driver 87 points behind Dixon.

Dixon was among those collected in a first-lap crash in Turn 3, but somehow avoided serious damage to his No. 9 PNC Bank Chip Ganassi Racing Honda in the incident precipitated by the spin of James Hinchcliffe after contact with Zach Veach. That led to Marco Andretti's car flipping over the top of the cars of Hinchcliffe and Ed Jones. No one was injured and Dixon's car emerged relatively unscathed. Dusty, but unscathed.

After making a pit stop to check for car damage under the full-course caution from the incident, Dixon used a two-stop strategy and fortunate timing with mid-race cautions to get a little more points breathing room for Sonoma. The only thing that went wrong for him was a pit-road speeding penalty on Lap 39, but he overcame the drive-through penalty for that as well.

"It was a huge day for the team, and (it) feels like a win for us," Dixon said. "The point (separation), whatever it is, is not a huge amount."

Dixon couldn't explain how his car wasn't damaged in the five-car pileup.

"I couldn't see anything once I got off in the dirt," he said. "There was just dust everywhere. Then I kept getting hit and hit (by flying debris) and I thought, ‘Oh, this isn't going to be good.' Luckily, we were able to keep the PNC Bank car running, back up from the incident and continue.

Dixon's clearest path to a fifth Verizon IndyCar Series championship is to finish first or second at Sonoma Raceway, where the winner earns 100 points and second place pays 80.

Rossi, who went with the expected three-stop fuel strategy Sunday, led a race-high 32 laps in the No. 27 NAPA AUTO PARTS Honda but ended up on the wrong side of the caution flags.

"It's one of those days; we had a fast car," Rossi said. "Our tire strategy was going to plan and everything was good until the yellow came on Lap 56 (when Andretti Autosport teammate Veach spun off course). It hurts a lot and hopefully it's not something that costs us the championship.

"We just have to rebound and move on from it and know that it's something that's out of our control. Now it's time to refocus and be ready to attack (at) Sonoma."

The road for a Team Penske driver to win the series championship for a third straight year became more difficult. Power endured a host of trouble in the 105-lap race and finished 21st, while Newgarden settled for 10th place.

Power was the Verizon P1 Award pole winner on Saturday and led the first seven laps before suddenly losing pace due to a gearbox issue in the No. 12 Verizon Team Penske Chevrolet. His day also included sliding into the Turn 12 tire barrier pit-road speeding penalty. Eventually, the gearbox failed.

Sato, in the No. 30 Mi-Jack/Panasonic Honda, held off Ryan Hunter-Reay for his third career victory and first since the 2017 Indianapolis 500. Sato is the eighth different driver to win a Verizon IndyCar Series race this season.

The margin of victory for the Rahal Letterman Lanigan Racing driver was 0.6084 of a second over Hunter-Reay, with Sebastien Bourdais third.

"Look at the fans here in Portland, so enthusiastic," said Sato, who started from the 20th position. "I think this is one of the most beautiful days in my life again."

Timing of the full-course cautions allowed others to benefit as well. With Simon Pagenaud and Charlie Kimball placing sixth and seventh, respectively, three of the top seven finishers started 20th or lower in the 25-car field.

The race marked the return of Indy car racing to the Pacific Northwest for the first time since 2007. The community's welcome was impressive with a large crowd lining the 12-turn, 1.964-mile permanent road course.