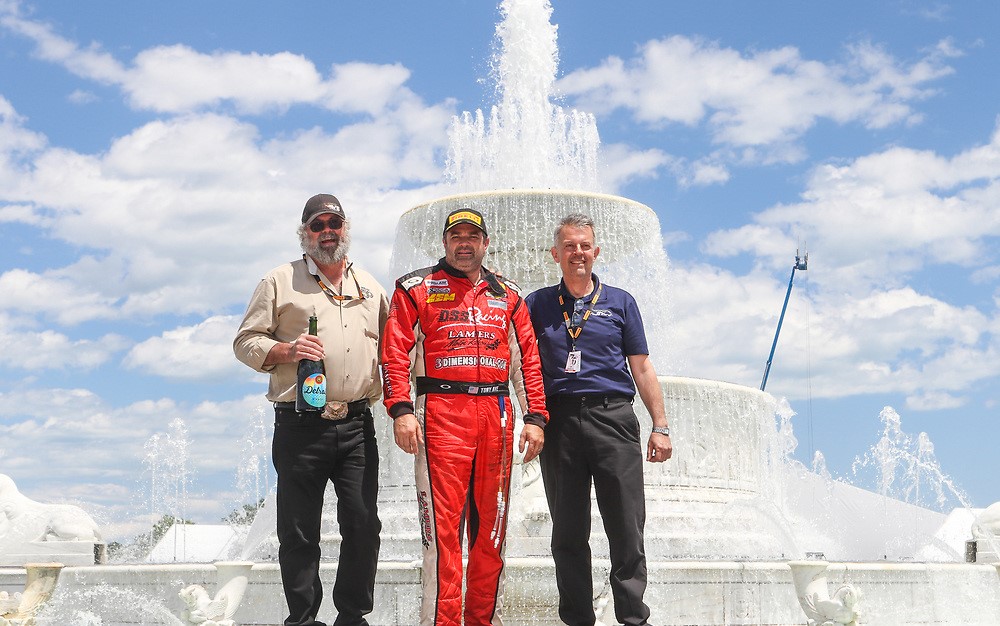 BELLE ISLE, Mich.  (2 June, 2019)- Saturday's Trans Am Series presented by Pirelli Muscle Car Challenge was all about survival. On Sunday, the TA2 powered by AEM drivers amped up the aggressiveness for the Motor City Dash, risking everything for a chance to permanently add their names to the list of winning drivers in the long Trans Am history of racing in Detroit.

Celebrating his 100th career Trans Am start, Tony Ave (No. 25 BC Race Cars) took the lead in the final laps to claim his 19th win and his first-ever win on the streets of Belle Isle.

Dillon Machavern in the No. 77 Liquid-Molly Prefix Ford Mustang dodged traffic and accidents to finish second and Tony Buffomonte in the No. 34 Mike Cope Racing recovered from a spin into the barriers to fight back for a third-place finish.

"I've been trying to win this race since 1994!" said Ave. "I've led it a bunch of times but haven't been able to hit that top spot. We didn't have quite enough speed early so I just stayed close. My car got good toward the end and I was able to run them down but passing was going to be an entirely different issue. Then what usually happens at these places started to happen, with everyone going sideways, grabbing gears and spinning tires. I thought ‘this is living!' We were just scrambling, but we came out with the lead and I couldn't be happier."

Misha Goikhberg in the No. 10 BC Race Cars Chevrolet Camaro started on pole, but lost the lead to Buffomonte after the green flag dropped. Buffomonte quickly built a gap from the field, leading the pack of 17 TA2 cars by more than a second before losing it on his own in Turn 7. The 2018 Detroit Grand Prix winner spun backwards, making hard contact with the back of the car into the barriers. Fortunately for the Illinois native, the Ford Mustang continued under its own power but Buffomonte never regained the lead as Machavern seized first.

"I had that one locked up and threw it away, so sorry to my guys," said Buffomante. "I was just pacing, minding the gap and then wheel-hopped it in going into Turn 7 again. I lost the back end and stuck it in the fence. I pulled it out of there and took off, doing some really fast laps, just trying to catch up. But that shows just how fast the car was, it was ridiculous. Next time. Congratulations to BC Race Cars on a great finish."

Dropping back to third, Saturday's race winner Goikhberg weaved back and forth from the inside then to the outside of Machavern.

Hitting the curbing on the Horshoe turn, Goikberg went spinning around the circuit and collected podium-contenders Rafa Matos and Lawless Alan in the process. Goikhberg and Alan continued but the reigning TA2 champion's charge to the top ended as Matos' No. 88 Lear 3Dimensional Services Group Chevrolet Camaro was towed back to the pits. The incident brought out the first of two full course cautions.

Goikhberg worked his way back up through traffic to take second, challenging Machavern for the lead. As Goikhberg and Machavern fought for the lead, Goikhberg made contact with Turn 7 tire barriers.Machavern lost momentum clearing the lapped traffic in front of him, opening the door for Ave to take the lead before the safety team was deployed to clean up the debris following Goikhberg's contact with the barrier.

With limited time on the clock to clear the debris,  the 75-minute clock expired with Ave claiming a big win while Machavern focused on his championship progression."It was a really good points weekend for us, though it was a frustrating race," said Machavern. "Tony (Buffomante) was really the class of the field. He was running an awesome race and he's been fast all weekend, but those bumps can throw you off under braking. But I'll take a lead any way I can get it. Once I got through, I thought we had it won but got balled up behind lapped traffic. Misha got into the back of me and the only thing that kept me from spinning was getting into the wall. You hate to lose the lead that way, but the most important thing in the end was the podium and the points. This was a very special win for Ave and I'm glad we could celebrate with him."

Local drivers Marc Miller and Jordan Dick also had their share of issues on the 14-turn, 2.35-mile course. Dick lined up for the start of the Motor City Dash but scratched with mechanical issues.

Championship leader Miller started the race in fourth, but early contact sent Miller into the Turn 3 wall. The home state favorite charged his way from the back of the field into the top-five but a braking issue sent Miller back on the way to a 13th place finish.

"The car was awesome, but I got taken out by another driver early," said Miller. "I drove back up through the pack to fifth, was taking it easy - and I was matching the leader's pace. Then suddenly, the brakes went down to the floor. I had to shove it into second to make the turn, but I had to bail and went right into the tire wall. It's frustrating, fighting back twice with a car we think could have won."

Matt Parent in the No. 14 Venture Construction Ford Mustang received the Cool Shirts Cool Move of the Race award following his best finish of the season in seventh.

The TA2 drivers have a two month break before returning to the prestigious Indianapolis Motor Speedway Aug. 1-4 supporting SVRA. For full results, championship points and photos from the event, visit GoTransAm.com.