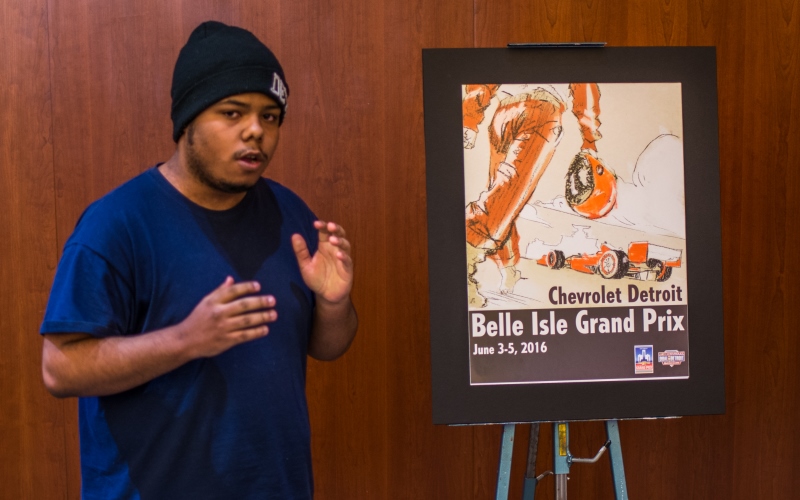 DETROIT, Mich. (April 15, 2016) – For the fourth consecutive year, the Chevrolet Detroit Belle Isle Grand Prix worked with the talented students at the College for Creative Studies (CCS) in Detroit to create the event’s official commemorative poster.

CCS design students competed over the last several weeks to produce the winning poster design, which will be featured on the 2016 poster and other creative elements for this year’s Grand Prix, June 3-5 at Belle Isle Park.

Some of the top design and illustration talent in Detroit is honed and refined at CCS and the Grand Prix has enjoyed working with the Midtown Detroit institution since 2013. The annual competition gives students the opportunity to create a unique piece of art that keeps alive the Grand Prix tradition of commemorative posters for the Detroit event that dates back to 1982.

On Thursday, April 14 the top three design entries, selected by CCS faculty, were presented to the distinguished judging panel.  CCS senior D’mitri Moore from Detroit was chosen as the winner with his retro-style design. Moore’s design features a mythical race car driver walking to their car set across a panoramic backdrop of the iconic Scott Fountain and the city skyline.

“This poster design competition at CCS is one of our favorite events leading up to the Grand Prix,” said Bud Denker, Chairman of the Chevrolet Detroit Belle Isle Grand Prix. “Being able to highlight a talented artist like D’mitri through the Grand Prix is a great way to showcase the illustration and design talent that CCS and the city of Detroit has to offer.”

The winning design will be refined, produced, promoted and sold leading up to the Grand Prix and will be unveiled as the official event poster during the PNC Racing Fair at The Palace of Auburn Hills on Wednesday, May 4.  The poster will be highlighted on race weekend and throughout the year, and the design may be included on merchandise and additional promotional items moving forward.

“When I thought of my design I really wanted to come at it from a narrative aspect, and I really wanted to evoke a feeling rather than create a nice design, because everyone here at CCS is a great artist so I had to make something special to stand out,” said Moore.  “It’s why I decided to craft the narrative of the feeling of the race so that the viewer can have the same feeling when they view the poster.  It’s really surreal winning the poster contest, I never thought this would happen.”

Finishing in second place in the competition was CCS student Alex Sweet while third place went to Emily Alpaugh. All three students are refining their skills in a design class taught by Bryan Durran, the creative director for Olympia Entertainment and the Detroit Red Wings.

ABOUT THE COLLEGE FOR CREATIVE STUDIES
Located in the heart of Detroit, the College for Creative Studies (CCS) educates artists and designers to be leaders in the creative professions. A private, fully accredited college, CCS enrolls more than 1,400 students pursuing Bachelor of Fine Arts (BFA) and Master of Fine Arts (MFA) degrees.

ABOUT THE CHEVROLET DETROIT BELLE ISLE GRAND PRIX
The Chevrolet Detroit Belle Isle Grand Prix is a 501(c)3 organization and a subsidiary of the Downtown Detroit Partnership. Scheduled for June 3-5, 2016, the event will include the Chevrolet Dual in Detroit presented by Quicken Loans featuring cars of the Verizon IndyCar Series, the Chevrolet Sports Car Classic presented by the Metro Detroit Chevy Dealers with the sports cars of the WeatherTech SportsCar Championship, the high-flying trucks of the SPEED Energy Stadium SUPER Trucks presented by Traxxas and the return of the Trans Am cars in the Motor City 100. Partners for the 2016 Grand Prix include General Motors, Quicken Loans and MotorCity Casino Hotel. For more information, visit www.DetroitGP.com and follow our social media pages at www.facebook.com/detroitgp, www.twitter.com/detroitgp and www.instagram.com/detroitgp.