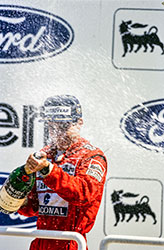 Brazilian Ayrton Senna dominated the 1988 Detroit Grand Prix, earning the pole and then leading from start to finish in the 63-lap race to claim his third Formula 1 win of the season and his third consecutive victory in the Motown race. Senna's victory also tied the season total of teammate Alain Prost, who finished 38.7 seconds behind him in second at Detroit. In qualifying, Senna claimed the 22nd pole of his career by more than eight-tenths of a second. He took the lead immediately, reaching the first corner on the 2.5-mile street course uncontested, and by lap 4 had constructed an advantage of more than 2 seconds. By the time Senna had to pit for fresh tires, he had constructed such a large lead that he stopped without losing the top position. Senna then cruised to victory, making it six of six for McLaren in 1988. Senna's win marked the last time the Detroit Grand Prix would be on the Formula 1 schedule.
lly Defends Detroit Grand Prix Title
June 21, 1987 – Formula 1 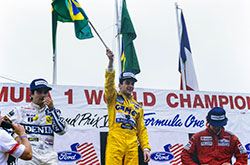 Ayrton Senna claimed his second straight victory in the Detroit Grand Prix by completing the 63-lap Formula 1 race without pitting for tires. The 33-second victory over Nelson Piquet was the first on the 2.5-mile street course by a car with an active suspension. Senna qualified second to pole winner Nigel Mansell, who took the lead immediately when the green flag waved. By lap 10, Mansell possessed a 5-second advantage over Senna. Suddenly, Senna felt his brake pedal go soft as he entered a turn and he backed off to allow his brakes to cool. By lap 26, Mansell's lead over Senna had stretched to 18.8 seconds. When Mansell pitted for tires on lap 34, Senna assumed the lead. Then, on lap 39, when Senna turned the event's fastest lap - one that was faster than his qualifying time - the Brazilian realized he was faster on his original tires than his competitors were on new ones. It was then that Senna decided to run the entire race without pitting. With 50 of the 63 laps completed, Senna possessed nearly a minute lead. Senna's sixth career victory was his last in 1987 and the final one for the Lotus team. He attributed his ability to run the entire race without changing tires to the cooling of his brakes early in the event and the car's active suspension.
Tire Problem Fails To Thwart Senna's Effort
June 22, 1986 – Formula 1 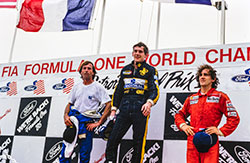 Brazil's Ayrton Senna earned the pole for the 1986 Detroit Grand Prix, but had to overcome a tire problem to earn his first Formula 1 victory in the United States. Senna possessed a 6.5-second lead when he suddenly ducked into the pits on lap 14 with a deflating right-rear tire. Senna returned to the track in eighth, 20 seconds behind leader Rene Arnoux. He immediately began charging to the front. On lap 15, he passed Michele Alboreto, than Stefan Johansson two laps later. Senna gained another position on lap 18 when Arnoux pitted for tires. Alain Prost pitted on lap 28 and Nigel Mansell on lap 31, giving Senna two more positions. When then leader Jacques Laffite pitted for tires on lap 31, Senna moved into second, 1.7 seconds behind leader Nelson Piquet. When Pique pitted for tires after leading eight laps, Senna resumed the lead and was never challenged the rest of the way in the 63-lap race. With 17 laps remaining on the 2.56-mile street course, Senna possessed a 27-second advantage over Prost, and at the checkered flag, he was 30 seconds ahead of runner-up Laffite. The victory was the fourth of Senna's career and it gave French engine maker Renault its only U.S. win. The race that had six lead changes among five drivers triggered a streak for Senna of five U.S. Grand Prix wins in six years.
Rosberg Claims First Detroit Grand Prix Victory
June 23, 1985 – Formula 1 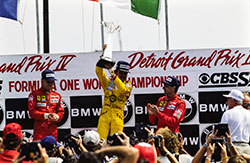 Keke Rosberg's decision to use a soft compound tire in the 1985 Detroit Grand Prix played an instrumental role in his fourth Formula 1 career victory and his first in the Motown event. For the fourth Detroit Grand Prix, Rosberg used a hard compound tire in qualifying and was fifth quickest. Nigel Mansell used the softer compound tire and was second fastest. That led Finland's Rosberg to gamble on the softer tire compound for the race, while his competitors elected the harder one. Rosberg needed only eight laps in the 63-lap race to take the lead from pole winner Ayrton Senna. He then avoided the tire and brake problems that plagued the other front-runners before holding off Stefan Johansson's Ferrari in the closing laps. At the race's halfway point, Rosberg possessed a 33-second advantage over Johansson, but he noticed his car's water temperature was increasing. Rosberg pitted and a crew member removed debris from his car's radiator. His crew also gave him new tires and when Rosberg raced off pit road he barely managed to beat Johansson's Ferrari to the first corner. Johansson hounded Rosberg on the 2.56-mile track until three laps from the finish when his car broke a brake disc. The victory was Rosberg's second consecutive Formula 1 win in the United States.
Piquet Dominates Third Detroit Grand Prix
June 24, 1984 – Formula 1 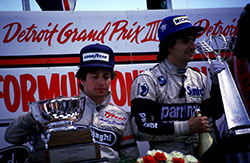 Nelson Piquet dominated the third Detroit Grand Prix, earning the pole and then winning the 63-lap race on the 2.56-mile course, despite crashing on the first lap and having to resort to a backup car. Piquet sped to the pole in his Brabham with a 1:40.980-lap. When the Formula 1 race started, chaos erupted as Nigel Mansell's Lotus hit the rear of Alain Prost's McLaren and bounced into the side of Piquet's Brabham. The Brabham then slid into the track's outside wall and into Michele Alboreto's Ferrari. Its right-rear wheel launched into the air and landed on the front of Ayrton Senna's Toleman, breaking its suspension. Simultaneously, Marc Surer's Arrows hit the Brabham's left-front wheel. Race officials stopped the race and reorganized the grid for a restart. Prior to the restart, Piquet, Alboreto and Senna went to backup cars. Surer didn't have a backup and was unable to continue. Piquet took the lead immediately and never relinquished it. He possessed a 5-second lead by lap 10 and had tripled it by lap 28. With 13 laps remaining, Piquet's advantage was more than 30 seconds. Piquet began winding down his car's boost with seven laps to go. By the end of the 1984 race, Piquet's lead was reduced to a few car lengths, but he was never seriously challenged and he took his second victory in eight days.
Alboreto Capitalizes On Piquet's Misfortune
June 5, 1983 – Formula 1 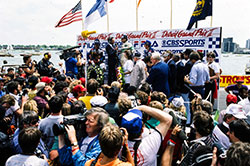 Michele Alboreto easily drove to victory in the Detroit Grand Prix after inheriting the lead with just nine laps remaining when Nelson Piquet was forced to pit his Brabham due to a flat rear tire. Alboreto's second Grand Prix victory was his first Formula 1 points win of the 1983 season. However, it was the last win for a normally-aspirated engine until the turbos were outlawed following the 1988 season, and it was the last of a record 155 victories for the Cosworth DFV. With the 2.56-mile street circuit slightly modified from its original configuration, the turbocharged cars were robbed of most of the advantage they possessed over the normally-aspirated engines. When the 60-lap race began neither Piquet nor Alboreto planned to pit for fuel. After 11 laps, Alboreto was fifth. He advanced to third when leader Rene Arnoux and the second place Keke Rosberg pitted. Alboreto moved into second when Jacques Laffite pitted and ran in that position until Piquet encountered his problems.
Watson Claims Inaugural Detroit Grand Prix
June 6, 1982 – Formula 1 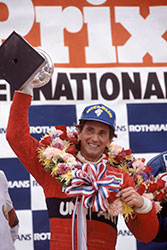 Northern Ireland's John Watson qualified 17th for the inaugural United States Grand Prix East, then charged his way through the field to claim his second Formula 1 win of the season. In the 62-lap race on the 2.59-mile, 17-turn street course in downtown Detroit, Watson's McLaren trailed leader Keke Rosberg by 15 seconds on lap 30. It was then that Watson passed Bruno Giacomelli for fifth. A short time later, Watson zipped around Eddie Cheever, Niki Lauda and Didier Pironi on the same lap to take second, 13 seconds behind Rosberg. In two laps, Watson had cut the deficit to 7 seconds. By the end of lap 37, Watson had reversed the role and grabbed a 2-second lead over Rosberg, who had lost third gear in his Williams-Ford. Watson led the rest of the race that reached its two-hour time limit short of its intended 76 laps. He averaged only 78 mph in the event, also known as the Detroit Grand Prix. There were three Grand Prix races held in the United States in 1982, the first time ever that one country had hosted three Grand Prix events in a single season. Despite numerous problems with the new circuit, race organizers were given excellent reviews for their efforts.
Back to Top
Quick Links