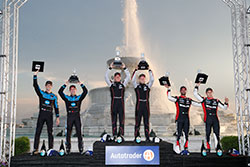 The Chip Ganassi Racing duo of Kevin Magnussen and Renger van der Zande led a Cadillac 1-2 finish at the manufacturer’s “home” race as the No. 01 Cadillac DPi-V.R. won the Chevrolet Sports Car Classic for the team’s first victory of its maiden IMSA season. The battle for the win came down to the final minutes of the 100-minute street course battle. Van der Zande took the green flag race restart with just two minutes and 50 seconds remaining and the polewinning No. 01 Caddy pulled away from the No. 31 Whelen Engineering Cadillac co-driven by Felipe Nasr and Pipo Derani to win by 0.573 seconds. The No. 10 Wayne Taylor Racing Acura ARX-05 finished in third place to round out the podium as drivers Ricky Taylor and Filipe Albuquerque retained the DPi class championship points lead.

In the GTD class, Ross Gunn and Romain De Angelis scored their first career IMSA WeatherTech SportsCar Championship wins in an unconventional manner. The duo’s No. 23 Heart of Racing Team Aston Martin Vantage GT3 took the checkered flag in second place, and they were awarded the victory after the No. 39 CarBahn with Peregrine Racing Audi R8 LMS GT3 was penalized by IMSA for a refueling time infraction.

In the GTLM class, Corvette Racing returned to compete in Detroit for the first time since 2008 as the C8.R Corvettes put on a great show for the hometown fans. Nick Tandy and Tommy Milner brought the No. 4 Corvette home 0.226 seconds ahead of the No. 3 C8.R driven by Jordan Taylor and Antonio Garcia. 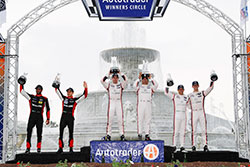 Team Penske teammates Juan Pablo Montoya and Dane Cameron helped break a remarkable streak of success for the “home team” at the 2019 Chevrolet Sports Car Classic. General Motors had earned at least one class victory in all nine sports car races on Belle Isle from 2007 through 2018, including seven consecutive overall victories since 2012. The No. 6 ARX-05 DPi ended that run, however, when Acura Team Penske flexed its Motor City muscle.  Montoya claimed the Motul Pole Award in Friday qualifying and held the lead for the first 19 laps before he came to pit lane to turn the car over to his teammate Cameron.  After a caution period, Cameron quickly reclaimed the lead from Tristan Nunez and held it for good after Lap 35.  The race’s final restart came with just 22 minutes remaining as Cameron tried to hold off the 2018 Chevrolet Sports Car Classic-winning No. 31 Whelen Engineering Cadillac. Driver Felipe Nasr was not unable to maneuver the No. 31 by the rival No. 6 Acura as Cameron won by .820 of a second. Team Penske’s No. 7 Acura of Helio Castroneves and Ricky Taylor finished third to complete the podium.  With the second-place finish, Nasr and co-driver Pipo Derani held on to the Prototype class championship lead by five points over Montoya and Cameron following the Detroit race.


In the GTD class, Jack Hawksworth and Richard Heistand drove the No. 14 AIM Vasser Sullivan Lexus RC F GT3 to victory in the second race of the 2019 WeatherTech Sprint Cup – the championship comprised of the seven IMSA events timed at two hours and 40 minutes or less. Heistand took the green flag in fourth place and ran inside the top five before he turned the No. 14 Lexus over to Hawksworth. With 51 minutes remaining, Hawksworth moved into the lead and he held off Patrick Long and the No. 73 Porsche 911 GT3 R for the win. The No. 12 Lexus combo of Townsend Bell and Frankie Montecalvo joined their AIM Vasser Sullivan teammates on the podium following a third-place finish. After their second consecutive win to begin the WeatherTech Sprint Cup season, Hawksworth and Heistand left Detroit with a 10-point lead in the standings. 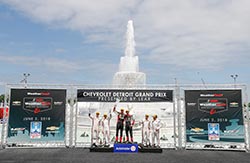 The pressure was on the Cadillac teams coming into the Chevrolet Sports Car Classic with General Motors winning every IMSA-sanctioned race on Belle Isle dating back to 2012.  The No. 31 Whelen Engineering Cadillac DPi-V.R driven by Felipe Nasr and Eric Curran worked hard to keep the streak intact, aided by a great race strategy from the Action Express team.  Nasr captured the race lead with 35 minutes remaining in the 100-minute race from Ricky Taylor in the No. 7 Acura Team Penske DPi. Nasr withstood a furious charge by Taylor to win by 1.016 seconds.  Taylor and co-driver Helio Castroneves finished second while the sister Team Penske Acura driven by Dane Cameron and Juan Pablo Montoya finished in third in the Prototype class. With the win, Curran and Nasr tied their Action Express teammates Joao Barbosa and Filipe Albuquerque in the No. 5 Mustang Sampling Cadillac for the IMSA Prototype championship lead heading to Watkins Glen. Katherine Legge earned her second consecutive GTD class win on Belle Isle as she and teammate Mario Farnbacher drove their Acura NSX GT3 to victory followed by their Meyer Shank Racing with Curb-Agajanian teammates Lawson Aschenbach and Justin Marks. The Paul Miller Racing duo of Madison Snow and Bryan Sellers finished third in the GTD class. 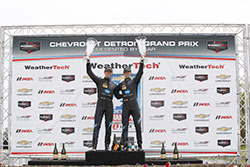 Not even a qualifying crash and being forced to start from the back of the Prototype pack could stop the No. 10 Konica Minolta Cadillac DPi-V.R. from taking the checkered flag for its record fifth consecutive win for Wayne Taylor Racing in the IMSA WeatherTech SportsCar Championship.  One lap after setting the fast qualifying time Friday, the No. 10 Cadillac made contact with the barrier wall. The incident brought out the red flag and the long cleanup forced the end of the session. Per IMSA rules, Ricky and Jordan Taylor had to start from the back of their class for causing an incident that brought an early end to qualifying. This left the No. 5 Mustang Sampling Cadillac DPi-V.R. and the No. 31 Whelen Engineering Cadillac DPi-V.R. starting 1-2 for Saturday’s 100-minute Chevrolet Sports Car Classic. Starting 12th in the field, Ricky Taylor was able to work the No. 10 Cadillac up to fifth during the first stint before giving way to brother Jordan 26 minutes into the race. The Wayne Taylor Racing team was able to move Jordan Taylor up to third during a yellow flag pit stop and then the team advanced to second place following the final green flag pit stop of the race. Taylor took the lead from Dane Cameron in the No. 31 Cadillac with 21 minutes remaining while Cameron was on pit lane. The Konica Minolta machine held on as Taylor finished 4.948 seconds ahead of Cameron for the team’s fifth straight victory and most improbable win of them all.  James French and Pato O’Ward of Performance Tech Motorsports earned their fourth consecutive win in the Prototype Challenge class while Andy Lally and Katherine Legge produced a landmark victory with the first win for the new Acura NSX GT3 in the GTD class for Michael Shank Racing with Curb-Agajanian. 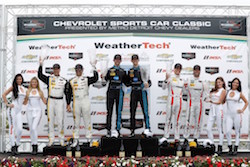 A great run from a mid-race restart in the Chevrolet Sports Car Classic presented by the Metro Detroit Chevy Dealers was just what Jordan Taylor needed to take the lead and hold on for his fourth career victory in Detroit, and second with brother Ricky. Action Express Racing started on the pole and Christian Fittipaldi led the first 26 laps of the race before he pitted under caution and turned the No.5 Corvette over to co-driver Joao Barbosa. When the green flag restarted the race with 48 minutes left, a group of lapped GT Daytona (GTD) cars were out front, with two Prototype Challenge (PC) cars behind them and then the Corvette Prototypes of Barbosa and Jordan Taylor. Taylor was able to pass Barbosa and the two PC cars to take the class and overall lead and was able to hold on to take the checkered flag 1.740 seconds ahead of Barbosa.  It marked the fourth career win on Belle Isle for Jordan Taylor, the third Sports Car victory in four years for Wayne Taylor Racing in Detroit and the second for the pairing of the Taylor Brothers, backing up their win from 2014. Jonathan Bomarito and Tristan Nunez finished third for the first podium result for Mazda Motorsports in IMSA WeatherTech SportsCar Championship competition. Leaving Detroit the Chevrolet Corvette teams of Fittipaldi/Barbosa and Taylor/Taylor were tied 151 points apiece in the Prototype championship standings.  Renger van der Zande and Alex Popow finished third overall to win the PC class while Jeroen Bleekemolen and Ben Keating finished 10th overall in winning the GTD class. 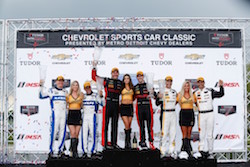 Dane Cameron passed Jordan Taylor for the race lead on Lap 41 and Cameron led the final 19 laps in the No. 31 Action Express Racing Corvette Prototype to win the Chevrolet Sports Car Classic presented by the Metro Detroit Chevy Dealers.  Cameron and teammate Eric Curran became the fifth different IMSA SportsCar Championship Prototype class winners in the first five races of 2015. It also marked the first win on Belle Isle for the Chevy-powered duo of Cameron and Curran.  Jordan Taylor was looking for his fourth straight victory in Detroit, before he was issued a drive-through penalty in the final 10 minutes. He recovered to finish in seventh place. Oswaldo Negri was able to pass Joao Barbosa on the final lap to prevent an Action Express Racing 1-2 finish as Barbosa finished third.  The team of Renger van der Zande and Mirco Schultis completed 59 laps to win the Prototype Challenge (PC) class while finishing sixth overall.  Ian James and Mario Farnbacher won the GT Daytona (GTD) class and finished 11th overall.
May 31, 2014 - Chevrolet Sports Car Classic 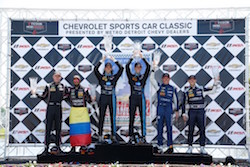 The final minutes of the one-hour, 40-minute Chevrolet Sports Car Classic presented by the Metro Detroit Chevy Dealers was white-knuckle driving for Ricky Taylor.  After leading for over an hour, Taylor and the Wayne Taylor Racing No. 10 Corvette Daytona Protoype (DP) took the white flag with Joao Barbosa in the Action Express Racing Corvette right behind.  Barbosa darted to the inside of Turn 3, nudging Taylor into the wall, but the contact caused the left-rear tire of Barbosa to shred as Taylor then sped on by. Taylor managed to hang on by 0.207 seconds ahead of the Spirit of Daytona Racing Corvette DP driven by Richard Westbrook and Michael Valiante.  It marked the third consecutive victory in Detroit for Ricky’s brother, Jordan Taylor, following wins in 2012 and ’13 in the GRAND-AM Rolex Sport Car Series.  Alessandro Balzan and Jeff Westphal drove to victory in the GT Daytona (GTD) class and an overall eighth-place finish. 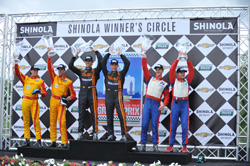 Wayne Taylor Racing Leads Corvette DP 1-2 Finish
The GRAND-AM Rolex Sports Car Series returned to Belle Isle with another great performance by Corvette in the shadows of the GM World Headquarters.  Wayne Taylor Racing’s Jordan Taylor won the pole for the Chevrolet GRAND-AM 200 presented by the Metro Detroit Chevy Dealers and led the first 16 laps before regaining the lead on lap 33. Taylor’s teammate Max Angelelli took over and led the remaining 28 laps to capture the checkered flag in the Daytona Prototype (DP) class.  Action Express was unable to continue its 2012 success on Belle Isle as teammates Christian Fittipaldi and Joao Barbosa finished 0.486 seconds behind to give the Corvette DP another 1-2 finish in Detroit.  Stevenson Motorsport and their Camaro GT.R captured the Grand Touring (GT) class victory by completing 60 laps and finishing 10th overall.
June 2, 2012 – GRAND-AM Detroit 200 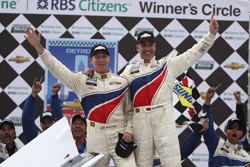 Law, Barbosa Win for Corvette in GRAND-AM Debut
The GRAND-AM Rolex Sports Car Series made its debut at Belle Isle and the Action Express Racing team enjoyed a stellar race as they finished first and second overall in their Corvette Daytona Prototypes (DP).  Darren Law and Joao Barbosa finished 0.440 seconds ahead of teammates Terry Borcheller and David Donohue while completing 72 laps in the GRAND-AM Detroit 200 presented by the Metro Detroit Chevy dealers.  Autohaus Motorsports completed a dominant day for Chevrolet in the shadows of their world headquarters as drivers Jordan Taylor and Paul Edwards won the Grand Touring (GT) class by completing 70 laps in their Camaro GT.R while finishing ninth overall.
Back to Top
Quick Links