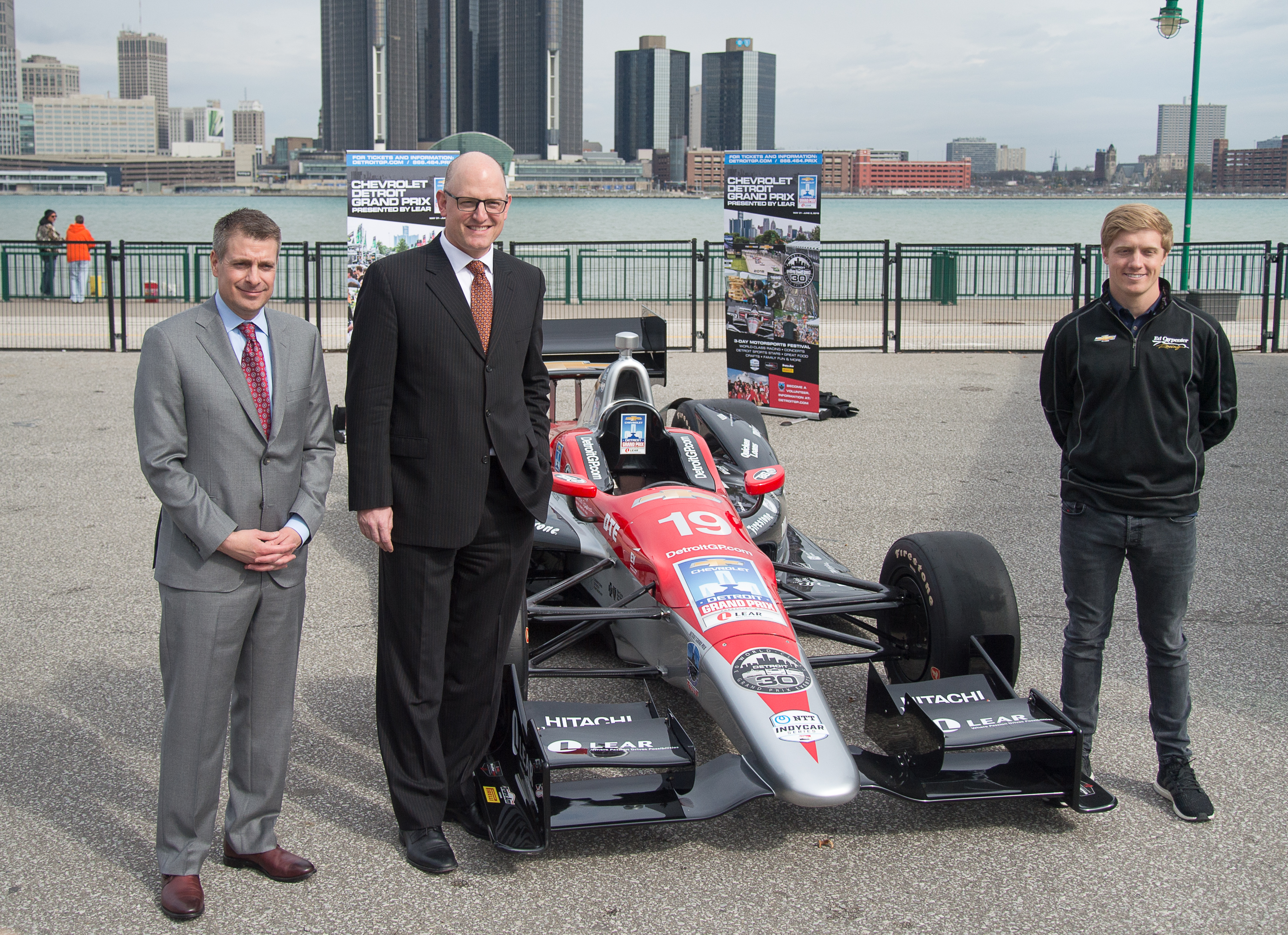 DETROIT, Mich. (April 18, 2019) - Reinforcing the partnership that highlights a unique "two-nation destination," the City of Windsor and the Chevrolet Detroit Grand Prix presented by Lear announced a renewed partnership for the May 31-June 2, 2019 event today.

Celebrating a 10-year partnership in 2019, the Grand Prix and the City of Windsor, Ontario, Canada will once again team up to showcase the unique beauty of the shared Detroit and Windsor waterfronts during the upcoming three-day festival on Belle Isle that includes world-class auto racing, live music and fun for all ages during the Grand Prix.

A key component of the partnership between the City of Windsor and the Grand Prix is the easy and efficient way for Canadian race fans to travel across the international border to visit the Grand Prix on Belle Isle through the reliable Transit Windsor bus service. Through the renewed partnership, Canadians will once again have the option to purchase the Grand Prix Canadian ticket package - including round-trip transportation to Belle Isle - online through snapd Windsor, in person at the Windsor International Transit Terminal or by calling 3-1-1.

Fans that purchase the Canadian ticket package have the option of securing a reserved grandstand ticket in the City of Windsor Grandstand 2, with a great view of the start/finish line and Turns 1 and 2, or a general admission ticket to the Grand Prix.  All ticketholders will have access to the Fifth Third Bank Paddock - the "locker room of motorsports" - to watch the teams prepare for the action on track all weekend, along with the Meijer Fan Zone that will feature interactive displays, the Detroit Sports District and more.  Fans can also enjoy live music featuring local and national acts all weekend long on the Entertainment Stage, headlined by Michigan-born country music star Frankie Ballard on Saturday night and legendary rock band Stone Temple Pilots on Sunday afternoon. Single-day tickets start at $62 CAD (including HST) for general admission or $99 CAD (including HST) for a reserved grandstand ticket.

"We are lucky to have such a passionate racing fan base right across the Detroit River in Windsor, Ontario, Canada that loves attending the Grand Prix on Belle Isle," said Michael Montri, President of the Chevrolet Detroit Grand Prix presented by Lear. "We want to thank Mayor Dilkens and the City of Windsor for their continued partnership. We're proud to work together and provide a first-class experience for Canadian fans to visit Belle Isle through Transit Windsor, while enjoying all the Grand Prix has to offer."

For more information on the Grand Prix and travel packages, fans can visit www.citywindsor.ca or call 311.  To buy tickets online visit www.snapdwindsor.com/GrandPrix or in-person at the Windsor International Transit Terminal.  Cash, debit cards, Visa and MasterCard are all accepted to purchase the Canadian ticket package.  Canadian fans who have already purchased tickets to the Grand Prix can buy round-trip transportation to Belle Isle for the Grand Prix from the Windsor International Transit Terminal for just $10 CAD on Friday and $13 CAD on Saturday and Sunday.

"The City of Windsor is proud to once again support the Chevrolet Detroit Grand Prix presented by Lear on beautiful Belle Isle," said Windsor Mayor Drew Dilkens.  "Giving our Canadian racing fans the option to purchase the Canadian ticket package online through snapd Windsor or in-person at the Windsor International Transit Terminal will help build the excitement for this summertime event here in the Windsor community."

The City of Windsor will also continue to sponsor the City of Windsor International Media Center located at the historic Belle Isle Casino during the Grand Prix. Over 700 media members are expected to attend the Grand Prix and provide coverage of the event in 2019. The City of Windsor International Media Center will be the home for the international press working the event throughout the weekend. Members from both the Detroit Metro Convention and Visitors Bureau and Tourism Windsor Essex Pelee Island will work together in the media center to serve as hosts for visiting media and to provide information and concierge services for the unique "two-nation destination" in the Windsor/Detroit area.