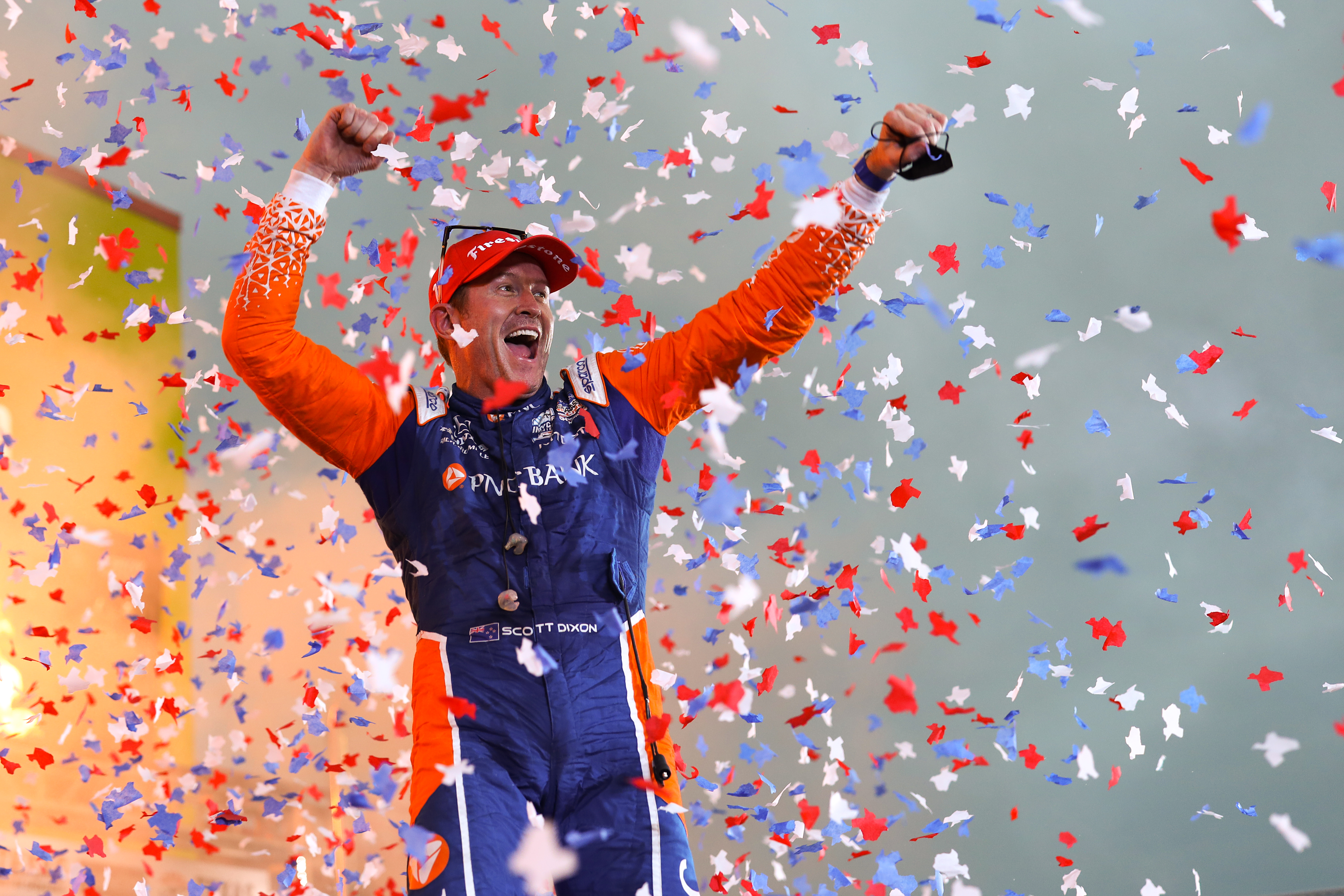 By the Numbers: Race Results

Scott Dixon schooled the rest of the Genesys 300 field in an oval-racing clinic Saturday night at Texas Motor Speedway, leading a race-record 206 of 212 laps for his first victory of the 2021 NTT INDYCAR SERIES season.

Dixon drove the No. 9 PNC Bank Chip Ganassi Racing Honda to victory by .2646 of a second over fellow New Zealand native Scott McLaughlin in the No. 3 PPG Team Penske Chevrolet, who was racing on an oval for the first time. Pato O’Ward finished third in the No. 5 Arrow McLaren SP Chevrolet.

“It was a bit of a crazy night for us,” Dixon said. “Definitely very tense there at the end. It was kind of cool to be racing a countryman for the last few laps. Fifth win at Texas, baby! That was awesome.”

This was the 51st victory of the legendary career of six-time NTT INDYCAR SERIES champion Dixon, just one behind tying Mario Andretti for No. 2 on the all-time win list. A.J. Foyt leads with 67 wins.

“It feels amazing to be in this position,” Dixon said. “You just never want it to end. We want to go back-to-back and try to tie Mario tomorrow. I'm sure that's not exactly what he wants to see. We'll keep our heads down. It's extremely tough. This season has been one of the toughest starts, I think, for a lot of us just with how tight the competition is.”

The victory also marks Dixon’s 19th INDYCAR SERIES season with at least one victory. He also took the series points lead with his fifth career victory on the 1.5-mile oval.

NTT INDYCAR SERIES drivers and teams will race again Sunday evening at Texas in the XPEL 375, a 248-lap race. Dixon will start from the pole after NTT P1 Award qualifying for both races was canceled due to weather delays earlier in the day, with the fields set by entrant points. Live coverage starts at 5 p.m. (ET) on NBCSN and the INDYCAR Radio Network.

Dixon, who started second, held a comfortable lead of three to five seconds at various points during the race, which went the distance despite rain in the Dallas-Fort Worth area. But McLaughlin applied plenty of pressure over the last stint of the race after the final pit stops for most of the field under caution on Lap 165.

Three-time Australian V8 Supercars champion McLaughlin showed the composure and tactical sense of an oval racing veteran in his first race of only left turns, staying within about half a second of Dixon during the closing laps.

Dixon approached lap traffic with two laps to go, with the turbulent air from those cars slowing his charge toward the checkered. But he held off McLaughlin long enough for victory, averaging 173.036 mph.

“I have this thing on the dash that tells me the gaps to cars,” said Dixon, 40. “I probably need to take it off because it was stressing me out more than anything. I kept looking down, looking in the mirror. He was fast.”

Said McLaughlin, 27: “I’ve never been this bloody happy to finish second in my life. I’m really stoked. I just couldn’t get Scotty there at the end. But I’ll tell you what: It was bloody cool battling with my all-time favorite hero, Scotty Dixon. Two Kiwis, one and two. My Mom and Dad are watching at home (in New Zealand), for sure.”

It was a night of mixed results for the winners of the first two races of the season.

Alex Palou, winner of the season opener April 18 at Barber Motorsports Park, finished fourth in the No. 10 NTT DATA Chip Ganassi Racing Honda after starting from the pole as the entrant point leader entering the race.

Colton Herta, winner April 25 at St. Petersburg, placed 22nd when a mechanical problem in his No. 26 Gainbridge Honda ended his night after completing 190 laps.

Sebastien Bourdais and James Hinchcliffe were unhurt in separate accidents that triggered the only two caution periods of the race.

Four-time INDYCAR SERIES champion Bourdais hit the SAFER Barrier hard in Turn 2 in the No. 14 ROKiT AJ Foyt Racing Chevrolet after he was nudged into a spin by contact from the No. 2 XPEL Team Penske Chevrolet of two-time series champion Josef Newgarden on Lap 56. Newgarden was moved to the back of the lead lap on the restart as a penalty for the contact.

Hinchcliffe made contact with the SAFER Barrier in Turn 2 after spinning on Lap 160 in the No. 29 Genesys Honda.