Indy Lights Presented by Cooper Tires NEWS Back to News 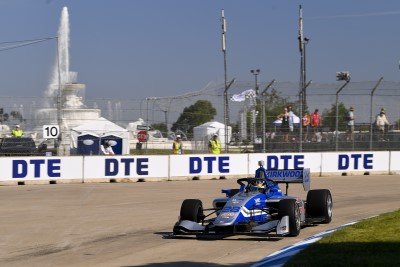 INDIANAPOLIS (Tuesday, Jan. 11, 2022) – INDYCAR is launching a new era of operational
control of Indy Lights Presented by Cooper Tires with the announcement of a 14-race schedule
for 2022.

The schedule features events in 11 key markets and three doubleheader weekends, including a
return to Iowa Speedway and the series’ debut on the Streets of Nashville. In November 2021,
INDYCAR added the role of promoter to its position of sanctioning body of Indy Lights.

All 14 races, qualifying sessions and practices will happen within 2022 NTT INDYCAR SERIES weekends, providing an inclusive atmosphere for the developmental series that serves as the final step toward competing in North America’s premier open-wheel series. Where available, Indy Lights will benefit from a more integrated paddock area as its team garages will be inside the NTT INDYCAR SERIES paddock footprint. Additional integration will come in marketing, digital assets and race officiating.

“To have all 14 races included with the NTT INDYCAR SERIES schedule and its world-class
venues is a tremendous step forward,” said Levi Jones, director of Indy Lights. “In addition to
competing for the 2022 championship, Indy Lights drivers, crew members and teams will be
able to see up close how event weekends run and operate in INDYCAR.

“Racing is the part they’ve known their whole life. Our goal is to also allow them the opportunity to see what it takes to become a true professional. The chance to connect and closely interact with the NTT INDYCAR SERIES paddock is a pathway to realize that goal.”

The 2022 Indy Lights Presented by Cooper Tires season begins Sunday, Feb. 27 on the Streets
of St. Petersburg. It is the 17th year that Indy Lights has competed on the temporary street
circuit. The championship continues Sunday, May 1 at picturesque Barber Motorsports Park
before the first doubleheader of the season on the iconic Indianapolis Motor Speedway road
course Friday, May 13 and Saturday, May 14.

The second doubleheader of 2022 is scheduled for Saturday, June 4 and Sunday, June 5 at the
Raceway at Belle Isle Park in Detroit before the classic American road courses of Road America
on Sunday, June 12 and Mid-Ohio Sports Car Course on Sunday, July 3.

The first oval of the season comes Saturday, July 23 at Iowa Speedway. It marks the first
appearance by Indy Lights on the .875-mile, D-shaped layout since 2018. It is followed by the
series debut on the fan-favorite Streets of Nashville on Sunday, Aug. 7 and another oval at
World Wide Technology Raceway on Saturday, Aug. 20.

“The key is we are training successful athletes today to become superstars tomorrow,” Jones
said. “Tests and races at all three venues, combined with the remaining schedule, will help
provide each of our drivers the experience they need to be ready for the final step of the NTT
INDYCAR SERIES.”

The 2022 championship finishes with a flurry of three races in eight days. The final stretch starts Sunday, Sept. 4 with an event at Portland International Raceway for the 18th season. The series champion will be crowned at the final doubleheader of the season, Saturday, Sept. 10 and
Sunday, Sept. 11 at WeatherTech Raceway Laguna Seca.

In the United States, all races will be broadcast live on Peacock Premium, NBCUniversal’s
expanding streaming service, with additional coverage during race weekends provided by the
INDYCAR Radio Network.

“Last season, over 20 drivers in the NTT INDYCAR SERIES competed in Indy Lights at some
point in their career,” Jones said. “It is a proven pipeline to the NTT INDYCAR SERIES, and we believe the connection will strengthen as the sanctioning body assumes operational control.
There is little question the 2022 championship trophy will be one the champion will keep on their shelf forever and could be a sign of bigger success to come afterward.”

Start times for 2022 events will be announced at a later date.