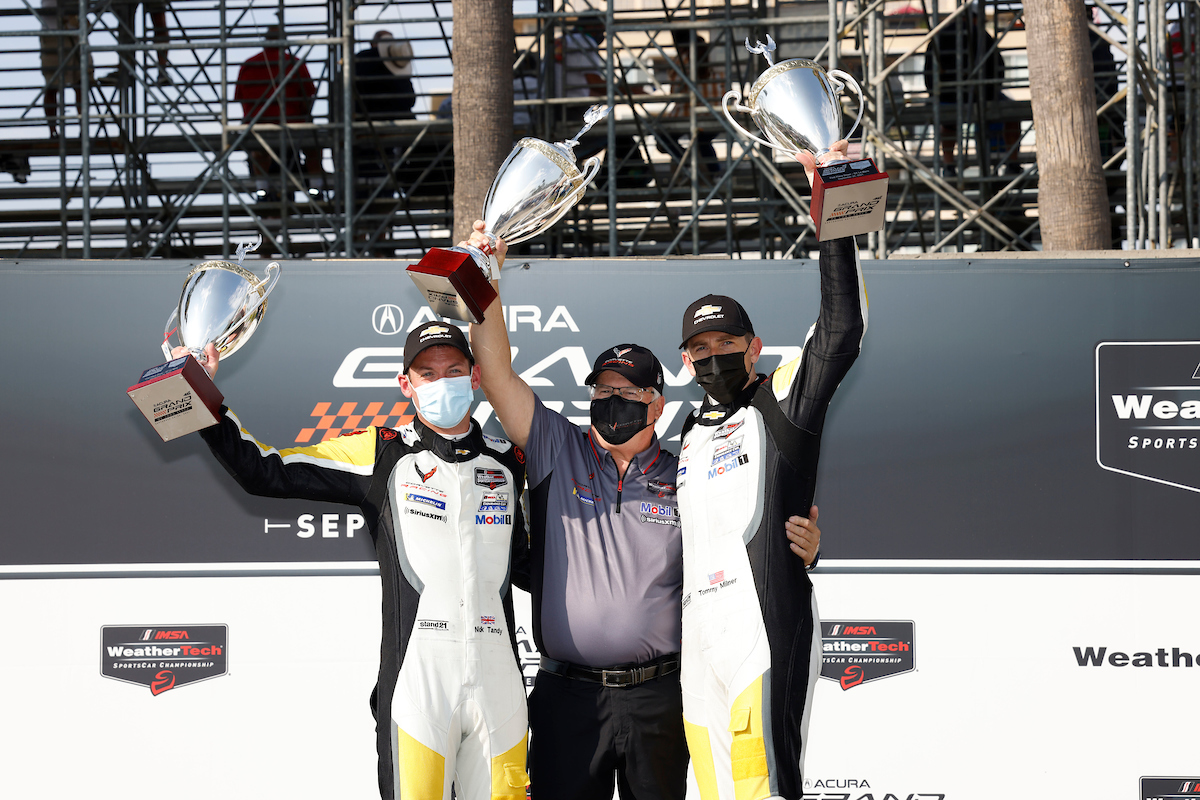 Tommy Milner followed the script Saturday at the Acura Grand Prix of Long Beach, zooming cleanly around teammate Jordan Taylor and into the GT Le Mans (GTLM) lead halfway through the 100-minute race. From there, Milner and co-driver Nick Tandy brought the No. 4 Corvette Racing C8.R home first in class for their second straight win of the 2021 IMSA WeatherTech SportsCar Championship season.

Milner started second to Taylor in the No. 3 Corvette but hounded his teammate throughout the first half before finding the opening he needed while battling through slower traffic.

“Jordan went for a move (on a lapped car) down the inside in (Turn) 6 and it didn’t quite stick, so his exit was a bit compromised,” Milner explained. “I was able to get outside of him on the entry and that’s the preferred line for the next corner. … I really only had the one opportunity (to make a pass), and thankfully I was close enough to take advantage of that.”

Ten minutes after the decisive overtake, Taylor and Milner made their lone pit stops of the race a lap apart. When the cycle was complete, Tandy had nearly a three-second lead on No. 3 co-driver Antonio Garcia. Though the advantage dwindled several times as the Corvettes continued negotiating through traffic, Garcia was unable to attempt an overtake and finished 0.751 seconds behind at the checkered flag.

It resulted in the fourth Long Beach victory for Milner and third for the American in the last four GTLM races on the 1.968-mile, 11-turn street circuit. It’s the second win for Tandy, who passed all the credit to his co-driver.

“He won the race,” Tandy said of his co-driver. “He drove an awesome first stint, got in front of the (No.) 3, and basically whoever came out of the stop in front was the car in prime position – and that was us today.”

Taylor and Garcia, who have four victories this season, finished second for the third straight race. They still hold a comfortable 160-point lead over Milner and Tandy in the standings and essentially only need to start the final two races to clinch their second consecutive GTLM championship.

Madison Snow and Bryan Sellers needed the perfect weekend to earn their first GT Daytona (GTD) win in what seemed like an eternity and put themselves in the middle of the championship battle. Mission accomplished.

The impressive victory Saturday by the No. 1 Paul Miller Racing Lamborghini Huracán GT3 vaulted Snow, Sellers and the team into second place in both the GTD season standings and the IMSA WeatherTech Sprint Cup. It’s their first win since the 2020 Rolex 24 At Daytona and lifted a massive weight off the drivers’ shoulders.

“In GTD right now, the competition is so steep so you just have to have the perfect day to win the race,” Sellers said after winning by 11 seconds. “To finally get one this year is nice. You feel like you just carry this monkey on your back until you do.”

After winning the Motul Pole Award on Friday, Snow patiently pulled away to lead by nearly three seconds before pit stops began in the 17-car class. Sellers took over the No. 1 for the final hour and quickly expanded the gap to more than 15 seconds, facing no pressure down the stretch.

The win was the 12th of Sellers’ IMSA top-level series career and the seventh for Snow. More importantly, it’s the first triumph for both on the noted Long Beach Street Course.

“Definitely as an American, it’s a place you want to win,” Sellers said. “It has a lot of history, a lot of great American drivers have raced here and won here. To put your name on that list is a pretty big honor.”

Zacharie Robichon and Laurens Vanthoor finished second in the No. 9 Pfaff Motorsports Porsche 911 GT3R and took over the GTD championship lead, 32 points ahead of Snow and Sellers. Roman De Angelis and Ross Gunn, who finished sixth Saturday in the No. 23 Heart of Racing Team Aston Martin Vantage GT3, are third in the standings, 104 points out of first place.

Robby Foley and Bill Auberlen entered the race in the No. 96 Turner Motorsport BMW M6 GT3 as the class leaders but suffered a 16th-place finish after an ABS issue led to Foley running into the tire barrier at Turn 8. The Turner drivers slipped to fourth in the standings, 150 points behind Robichon and Vanthoor.