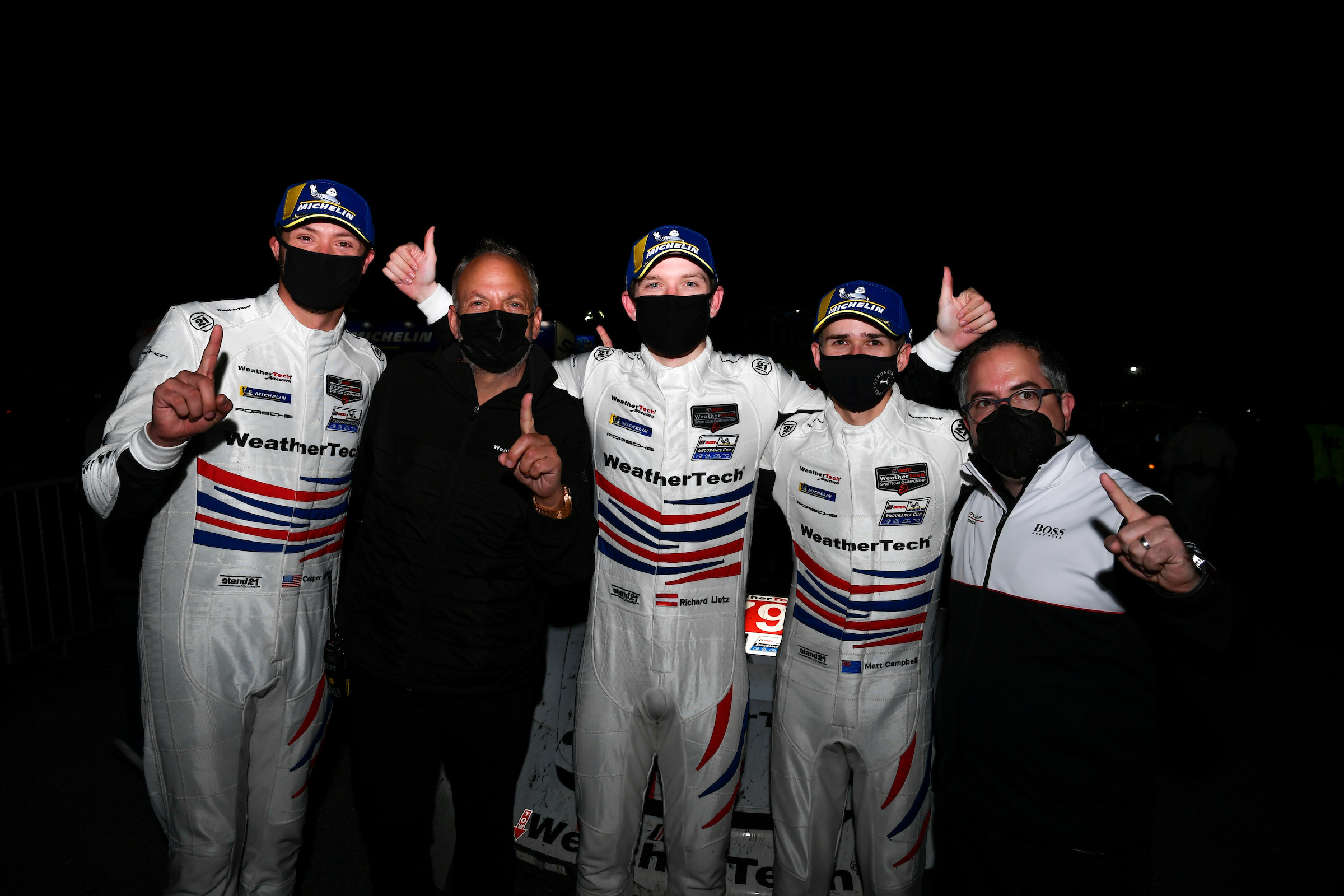 SEBRING, Fla. – Porsche reigns supreme in the GT classes of the Mobil 1 Twelve Hours of Sebring Presented by Advance Auto Parts once more.

For the second straight year, the German manufacturer powered the winning entries in both the GT Le Mans (GTLM) and GT Daytona (GTD) classes. The No. 79 WeatherTech Racing Porsche 911 RSR-19 was victorious in GTLM, having the door to victory lane opened Saturday night when the two cars ahead collided with minutes remaining in the 12-hour endurance marathon at Sebring International Raceway. Meanwhile in GTD, the No. 9 Pfaff Motorsports Porsche 911 GT3R paced a 1-2 Porsche finish.

It also pushed Porsche’s total of class wins in the Twelve Hours of Sebring to 100.

“I’m just happy to see a 1-2 for Porsche in GTD and Porsche winning GTLM,” said Lars Kern, a co-driver in the No. 9 Pfaff Porsche who also works as a Porsche engineer. “I think it’s just the perfect race weekend for Porsche.”

The No. 79 WeatherTech Porsche appeared destined for a third-place finish behind the No. 3 Corvette Racing Chevrolet Corvette C8.R and the No. 25 BMW Team RLL BMW M8 GTE. That is, until Connor De Phillippi tried to muscle the No. 25 past Antonio Garcia in the No. 3 at the Turn 7 hairpin with just eight minutes to go.

Both cars went off course after the collision. De Phillippi was penalized for incident responsibility, the pit-lane drive-through relegating him to a second-place finish. Garcia limped the No. 3 Corvette home in fourth. Barely able to avoid the fray in the No. 79, Mathieu Jaminet accepted the spoils and the win he shared with co-drivers Cooper MacNeil and Matt Campbell.

“Going to Turn 7, I think the BMW had a chance and it looked like the Corvette didn’t close the door that much,” said Jaminet, who picked up his first IMSA WeatherTech SportsCar Championship victory, coming in one of the crown jewels of endurance sports car racing. “The BMW just dove in, was maybe a little bit optimistic on the brake. When I came to the corner, they were more or less side-by-side and just touching and hitting each other. They had big contact and I had to avoid the BMW, which was going to the other side of the track. So, I went left straight in the grass. I got really lucky there because I think it was pretty close with the BMW to being a big crash. It was a little bit of a crazy fight, let’s say.”

While the No. 79 remained on the lead lap throughout the race, it didn’t seem to have enough to challenge either the No. 3 or the No. 25. The Corvette set the early pace until a radio miscommunication with driver Nicky Catsburg had him fail to pit at the right time under a full-course caution with five hours remaining.

It looked then like the No. 25’s race to win until the No. 3 made a fortuitous pit stop just before a caution with less than two hours to go. It allowed Garcia to jump back into the lead and set up the fireworks with De Phillippi.

“We were lucky to be in the right place at the right time,” Jaminet said. “Sometimes it’s part of racing. It’s a nice reward for this whole team, for the program.”

But the No. 79 Porsche persevered and won while leading only 28 laps. A customer team operated by Proton Competition beating a pair of factory-backed efforts is worth shouting about, according to MacNeil.

“I don’t think anybody would have predicted that, but that’s what hard work, perseverance and an amazing group of guys can do for you,” said MacNeil, who claimed his ninth IMSA win and second at Sebring. The first came in a Porsche in 2013, in the GTC class.

“I’m thrilled for the whole team, for the brand,” MacNeil added. “My second race in GTLM ever, to get the win, especially at Sebring against some of the best drivers in the world, top manufacturers, factory-backed efforts. We show up with a non-factory effort and a Silver driver in the car. I could not be more thrilled to get the win here at Sebring.”

The win was also the fourth straight at Sebring for a Porsche in GTLM, with the factory-backed Porsche GT Team capturing the past three.

The next race for the GTLM class is the Sahlen’s Six Hours of The Glen, June 24-27 at Watkins Glen International.

Zacharie Robichon was worried things were going too well. But in the end, he didn’t have to worry. Laurens Vanthoor knew the No. 9 “Plaid” Porsche was good and, along with Robichon and Kern, drove it to the GTD victory.

Combined with smooth pit stops and excellent strategy, the driver trio kept the No. 9 in the hunt throughout the 12-hour race. They fended off challenges from a myriad of GTD contenders, including the No. 16 Wright Motorsports Porsche, both Vasser Sullivan Lexuses and the No. 1 Paul Miller Racing Lamborghini Huracán GT3.

In his first season of GTD competition after collecting five WeatherTech Championship GTLM wins and the 2019 championship with the Porsche GT Team, Vanthoor took over for the final race stints. The 29-year-old Belgian bumped his way past the No. 12 Vasser Sullivan Lexus and into the lead with 90 minutes remaining and wasn’t seriously challenged after that.

The No. 9 Pfaff Porsche won by 2.112 seconds over the No. 16 Wright Porsche, with the No. 23 Heart of Racing Team Aston Martin Vantage GT3 placing third.

“It went really, really smooth,” Vanthoor said. “We had a really good car. We had it in Daytona as well, but we made mistakes. We did a flawless job (at Sebring) and everything went perfect. That’s the way you win races.”

Robichon felt a sense of redemption since the Canada-based Pfaff team was limited to two races last year due to COVID travel restrictions. The win was a welcome reward for everyone on the team.

“It’s pretty special, especially after last year,” Robichon said. “It was a difficult year for the team. Obviously, we didn’t race very much, so to come back here in only our second race back, so to speak, we end up in victory lane – at Sebring, no less – is pretty special.

“The race was almost going too well at one point. It felt like something had to go wrong and, luckily, I was wrong. Nothing went wrong.”

The GTD class is in action next at the Acura Sports Car Challenge at Mid-Ohio from May 14-16.