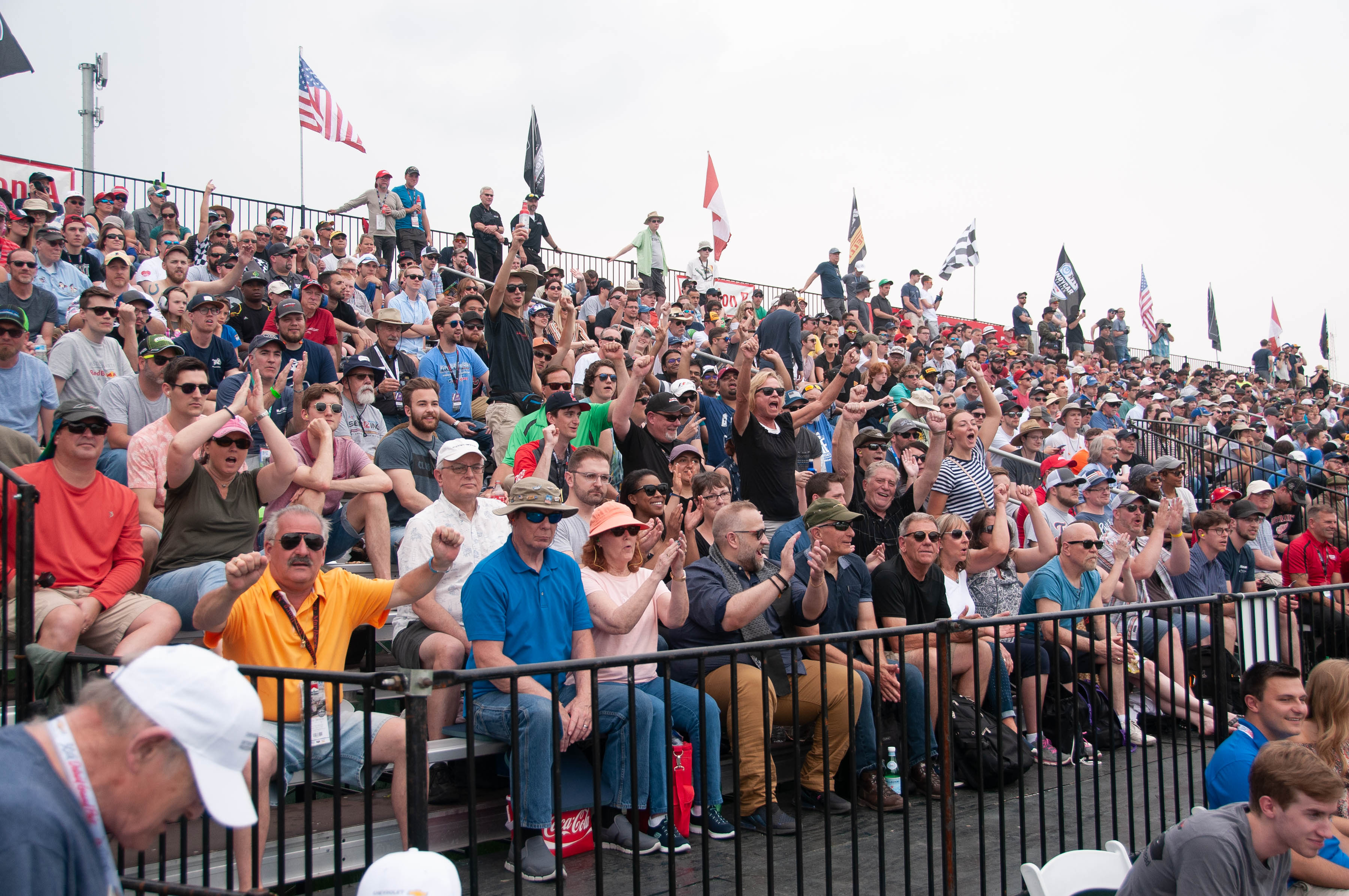 DETROIT, Mich. (June 12, 2019) - Solid attendance, improved television viewership and record social media results highlighted a very successful weekend both on and off the track at the 2019 Chevrolet Detroit Grand Prix presented by Lear.

With the final numbers reported this week for the 30th Detroit Grand Prix, held May 31-June 2 at Belle Isle, the results reflect how the event continues to be a positive force for the local community and the region. The impact of the Grand Prix and the spotlight it shined on the Detroit and Windsor areas was felt on a local, national and international level.

Grand Prix organizers estimated that this year's summer celebration attracted 95,000 people to Belle Isle Park over the course of its three days. This included over 25,000 fans attending Comerica Bank Free Prix Day on Friday, May 31. Severe weather on Saturday, June 1 affected the attendance numbers as approximately 30,000 fans visited the Raceway at Belle Isle Park and on track action had to be postponed for a couple of hours with lightning accompanying the storm that surrounded the island. With sunny skies and cooler temperatures on Sunday, June 2, the Grand Prix attracted its largest Sunday attendance since 2014 with approximately 40,000 fans visiting Belle Isle. With the impressive turnout, it marked the seventh time in the last eight years that the Chevrolet Detroit Grand Prix presented by Lear reached the 95,000 mark in total attendance.

The Chevrolet Dual in Detroit NTT IndyCar Series doubleheader weekend delivered the highest total viewership numbers and the best combined Nielsen television rating in three years with the Saturday and Sunday race broadcasts on NBC. Dual II on Sunday, June 2 generated the top numbers for the weekend with nearly 1.2 million total viewers witnessing the action from Belle Isle. In the race won by reigning IndyCar Series champ Scott Dixon of Ganassi Racing, the total viewership grew by an impressive 17% from last year's Sunday race in Detroit as the broadcast drew a .83 final Nielsen rating. Saturday's Dual I also brought more total viewers, despite some significant weather challenges. Josef Newgarden of Team Penske, the 2017 series champion, won in a 75-minute timed race after the lightning delay on Belle Isle as the total viewership on NBC increased by 2% over 2018 with a final household rating of .70.

The two races combined to average a Total Audience Delivery (TAD) of 929,000 viewers across NBC, NBCSports.com and the NBC Sports app - an increase of 10% from the TV-only viewership numbers in 2018 (846,000) on ABC. With the combined ratings of the two races, the Detroit weekend marked the second-highest rated NTT IndyCar Series event outside of the Indianapolis 500 so far this season.

The local TV numbers were also impressive from the weekend. Working with new local TV partner WDIV Local 4 (NBC affiliate station), the Friday, May 31 prime time (7-8 pm ET) broadcast from Belle Isle that included in-depth live coverage from the PwC Grand Prixmiere presented by Chevrolet charity event drew a 4.4 household rating and was the top local show in its time slot. Both the Saturday and Sunday IndyCar race broadcast ratings in the Detroit market on WDIV-TV were up significantly over 2018 with both telecasts ranking among the top four markets nationally, and Detroit was the second-highest rated TV market in the nation for Sunday's Dual II NBC race broadcast.

The Grand Prixmiere gala raised approximately $800,000 for the Belle Isle Conservancy and targeted improvement projects on the island. Including this year's total, the Grand Prixmiere has now generated over $4.8 million for the Belle Isle Conservancy over the last six years. A total of $200,000 from the funds raised at May 31st event will be utilized for long-term maintenance and operational work to keep the iconic James Scott Memorial Fountain operating on Belle Isle for years to come. More than $600,000 from the donations raised at the Grand Prixmiere over the last two years have been dedicated to projects at the fountain - which annually begins operating on Friday at the Grand Prix and runs throughout the summer on Belle Isle - thanks to DTE Energy.

INDYCAR also reported solid results for Chevy Dual in Detroit through both social media as well as traditional media coverage. Social interactions on INDYCAR's channels were up by 16% from results during the 2018 race while followers grew by 21% percent year over year during the Belle Isle event.

The IMSA WeatherTech SportsCar Championship also reported significant social media results from the Detroit race weekend. The series experienced growth of at least 25% in impressions and engagement across its Facebook, Instagram and YouTube channels during the Belle Isle event, while topping the one million impressions mark on both Facebook and Instagram for the first time during its annual Detroit visit.

The Grand Prix social media channels reached record highs in 2019. During race weekend alone, the event set new benchmarks for reach, impressions and overall mentions of the Grand Prix by social media users. According to figures tracked by industry leaders Sysomos Social Analytics and Simply Measured, the Grand Prix increased its reach across all of its social media channels to an all-time high of over 72 million during the 2019 race weekend. Total potential impressions rose a whopping 70% from last year to an impressive total of 296 million in 2019. Overall mentions, including the official handle @DetroitGP and hashtag #DetroitGP were up by more than 17% from 2018. #DetroitGP was also a trending topic on Twitter during all three days of the Grand Prix, including in several markets across the United States as well as in international markets like the United Kingdom, the Netherlands and Puerto Rico.

The impressive totals also extended to corporate partnerships for the 2019 Grand Prix. A total of 75 local and national sponsors supported this year's event.

"By all measures we enjoyed a very successful 2019 Chevrolet Detroit Grand Prix presented by Lear on Belle Isle," said Bud Denker, Chairman of the Grand Prix. "Even with the severe weather that came through on Saturday of race weekend, we had great attendance all three days of the Grand Prix. We experienced significant growth in our television viewership both locally and nationally through the NBC INDYCAR race telecasts and millions of fans from around the globe saw the beauty of Belle Isle and the Detroit and Windsor waterfronts through the domestic and international TV broadcasts. We also enjoyed record social media coverage throughout the event. The results we are most proud of though is that more than 95,000 fans enjoyed a fun and safe weekend on Belle Isle. The island and our area were the real winners with the money raised at the Grand Prixmiere, the boost that the event weekend brought to our local economy and how the Grand Prix once again showcased the Motor City to an international audience."

The results on the track were also memorable at the 2019 Grand Prix. In addition to Newgarden and Dixon winning the two Chevy Dual in Detroit NTT IndyCar Series races on Saturday and Sunday, Acura Team Penske won the IMSA WeatherTech SportsCar Series race on Saturday, June 1. Drivers Juan Pablo Montoya and Dane Cameron captured the Chevrolet Sports Car Classic for the Penske team while Jack Hawksworth and Richard Heistand of the AIM Vasser Sullivan team drove their Lexus to a GTD class victory. In the Trans Am Series presented by Pirelli, the BC Race Cars team swept the weekend with their Chevrolet Camaros as Misha Goikhberg won Saturday's race before his teammate Tony Ave won in his 100th series start on Sunday.

ABOUT THE CHEVROLET DETROIT GRAND PRIX PRESENTED BY LEAR The Chevrolet Detroit Grand Prix presented by Lear is a 501(c)3 organization and a subsidiary of the Downtown Detroit Partnership. Held May 31-June 2, 2019, the event included the Chevrolet Dual in Detroit featuring the cars of the NTT IndyCar Series, the Chevrolet Sports Car Classic with the exotic sports cars of the IMSA WeatherTech SportsCar Championship and the Trans Am Series presented by Pirelli. Partners for the 2019 Grand Prix included General Motors and Lear Corporation. For more information, visit www.DetroitGP.com and follow our social media pages at www.facebook.com/detroitgp, www.twitter.com/detroitgp and www.instagram.com/detroitgp.